Often, when we take a look in the mirror we don’t factor in that the reflections are likely distorted by socially constructed ideas of beauty. Pregnancy is a beautiful journey but often after child birth our bodies are no longer the same. It’s difficult to come to terms for many, so this MumsVillage Show episode is about dealing with that.

We had the hilarious Lynda Nyangweso, whose voice is familiar to many being a radio presenter and singer. But above all she is a wife and mother – a journey has been so open about sharing on her YouTube channel dubbed Highly Unqualified. Our other guest was the lovely Habida who is a musician, writer, actress, mother and wife, a show that women can really have it all. Being in the limelight, it’s harder for these women as people troll them about their bodies and hide behind a screen. But body image is something that most women struggle with especially after birth.

Here are some memorable quotes from the guests:

“The worst thing I did, after I had a cesarean, was look in the mirror. Don’t do it! Then you notice everything moves down an inch.” –Lynda Nyangweso

“I’ve always had a love hate relationship with my body. Especially being a bigger girl then I put myself out there, so everyone felt the need to comment. Like I didn’t already know and it was big secret. I’m fat then one day people realized it.” -Lynda Nyangweso 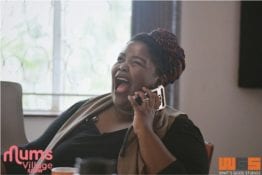 “I had the baby and it was a cesarean, and all I could think is what is that fold? You’re kidding me! That’s not my body.” –Habida

“My father always told me: you are great, you are amazing, my outwards isn’t me” – Habida

If you didn’t have a chance to watch the show, watch it below. This is how it all went down:

Here is what some of the viewers had to say:

Stay Tuned for the Next Episode Coming Soon with more goodies up for grabs!