On a warm Friday afternoon I sat down with freelance photographer, blogger and new mom, Tatiana Karanja. Her gorgeous baby is Olive Chemeni Karanja Mutiso. 4 months ago she made her way into the world but not without a crazy delivery story for mom to tell though.

Surrounded by society with cultural stigma around having a child out of wedlock, she has a wonderful community of support around her including her parents and boyfriend, Wayne Mutiso.

Tatiana: Ever since I was young I had this plan in my head. Get married at 25, first kid at 26 and Twins at 28. Then adopt a child from Mongolia at 29. 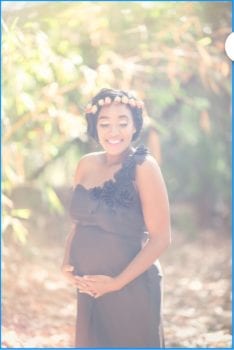 Yvonne: So you were 24, pregnant and not married. What was your first thought when you found out you were pregnant?

Tatiana: I feel like I knew I was pregnant, but I had a test that said it was negative. So then I did another test, Wayne was the one who went to the bathroom to check what it said. And he just came back into the room and he was like “Yeah, you’re pregnant.” And he got back into bed and we continued watching TV. We just said nothing about it that night.

Yvonne: Did you find out the sex of your baby beforehand or you wanted it to be a surprise?

Tatiana: I don’t think it’s that big of a surprise, I mean you’re having a kid, that enough of a surprise. We just found out at the doctor’s and it was so emotional for both of us. We both just started crying. It was so cute. But I kind of always knew, I just felt that it was a girl.

Yvonne:  What ran through your mind when you first held Olive?

Tatiana: Oh my gosh! I was so emotional. I’m even getting emotional right now.I couldn’t even imagine that I gave birth to that little child. It was the happiest moment of my life

Yvonne: You mentioned that your delivery was a horrid affair. What really happened?

Tatiana: It was bad. I’m so afraid of infections and over the 9 months that’s what I was worried about. But when the time came, I don’t even know how to describe the pain I was in. It was extremely painful and it just kept coming and coming. In the beginning it was subtle so I knew I’ve got this, I’m a G!. But you’re hearing screams around you and trying to console myself that everything will be  fine. Then it reached hour 4 and I was like bring those pain medications and I even asked for a gas mask, which did not even work. The pain just made me snap at everyone but this one nurse got through to me. Her back rubs were heaven. But giving birth was way easier than the contractions. At first though I was trying to hold it in because I was afraid of the pain to come. I just had these weird visions. Then I saw the Doctor coming with metal things and I was sure he’s going to cut me. So I didn’t want to push but when I finally did she was out in about 15 minutes.

Yvonne: Are you looking to have more kids?

Yvonne: Throughout your experience as a mum and being pregnant are there things you heard and ignored, rightly so?

Tatiana: Chilli. People say it’s not good for the baby if I eat it. But I’ve been eating it since day one and Olive’s been fine. Every food affects people differently. Also people say after childbirth you should be in bed rest for weeks. Everyone’s body works differently. But my mom told me the day she gave birth to me she was up and about in town with me. She said that’s not real life. You can be back into the routine of normal life in no time.

Yvonne: When Olive is older what would you like her to say your legacy was?

Tatiana: I was kind and taught her good values like to be kind to people and to animals, importantly for me, work hard and do things that make you happy.

Yvonne: What is Olive’s descent?

Tatiana: I’m 50% Kenyan, though my dad will always argue 51%. And my mom is Ethiopian Eritrean and Dutch. Wayne is Kamba, Kalenjin English and Seychellois as well as a mix of other things. Olive is essentially Kenyan and a little bit of everything.

Visit her Photography Blog for more of her visual artistic work

You can catch Tatiana Karanja speaking about Parenting as a Millennial mum on the First Episode of MumsVillage Show here.