Calling On Fathers On The Day of The African Child - MumsVillage

When you start to do the things that you truly love, it wouldn’t matter whether it is Monday or Friday; you would be so excited to wake up each morning to work on your passions. Edmond Mbiakading

Calling On Fathers On The Day of The African Child

Today Is the International Day of the African Child. It was first established by the Organization of the African Unity in 1991. The day aims at raising awareness for the situation of children in Africa, and on the need for continuing improvement in education. It encourages people’s spirit of abundance to share something special with a child in Africa.

Marked annually since June 16 1991, this day was set up to honour the children who participated in the Soweto Uprising on June 16, 1976. An Article from 100Photos, recounts of that day, “ Few outside South Africa paid much attention to apartheid before June 16, 1976, when several thousand Soweto students set out to protest the introduction of mandatory Afrikaans-language instruction in their township schools.

“Along the way they gathered youngsters from other schools, including a 13-year-old student named Hector Pieterson. Skirmishes started to break out with the police, and at one point officers fired tear gas. When students hurled stones, the police shot real bullets into the crowd. “At first, I ran away from the scene,” recalled Sam Nzima, who was covering the protests for the World, the paper that was the house organ of black Johannesburg.

“But then, after recovering myself, I went back.” That is when Nzima says he spotted Pieterson fall down as gunfire showered above. He kept taking pictures as terrified high schooler Mbuyisa Makhubu picked up the lifeless boy and ran with Pieterson’s sister, Antoinette Sithole. What began as a peaceful protest soon turned into a violent uprising, claiming hundreds of lives across South Africa.

It is estimated that 20,000 students took part in the protests. They were met with fierce police brutality. The number of protesters killed by police is usually given as 176, but estimates of up to 700 have been made. 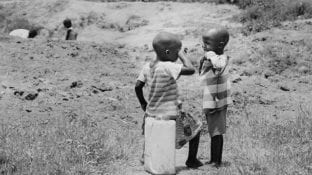 Today, this day is used to highlight challenges that the African Child still faces. This year’s theme is  “The 2030 Agenda for Sustainable Development for Children in Africa: Accelerating protection, empowerment and equal opportunity.”

With only 13 years left before 2030, there is still a lot of work to be done to actualise the protection, empowerment and equal opportunity for Children in Kenya.

Currently some of the main problems faced by children in Kenya are poverty, lack of proper health care, violence against children, child labour and all these combined factors, prevent children from receiving a proper education.

In Kenya, the most vulnerable group of children are aged between 6-10, followed by those aged 11-15 years. This was revealed in The Child Protection Report released in April this year by Childline Kenya. The report indicated that Nairobi county has the highest number of reported cases of all forms of child abuse. Other counties with high numbers of child abuse cases were Kakamega, Kiambu and Nakuru.

Cases involving girls were reported more often than those involving boys, despite both sexes equally likely to be abused, according to Childline Kenya Executive Director  George Kidenda.

“Unfortunately, the most trusted people in a children’s life are the same people that lead in abusing them sexually. Within this reporting period, fathers took the lead of abusing their daughters sexually followed by uncles’” he revealed at the launch. 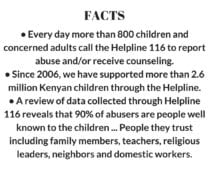 We all plant the seed of violence in our children, especially the boys and we teach them constantly by using words such as ‘be a man’, ‘Don’t behave like a woman’, ‘You have to defend yourself’, ‘don’t let anyone disrespect you’ and ‘boys will be boys’ that in order for them to be a real men, they have the right to defeat anyone who challenges or defies that sense of entitlement.

We are calling on Father’s to step up and challenge these norms and help change the conversation. Help champion for the rights of the African Child as we work together to raise them. It all begins with how you interact with the children in your life and what lessons you pass on to them.

According to the Father Involvement Research Alliance review,” Girls with involved fathers have higher self-esteem, and teenage girls who are close to their dads are less likely to become pregnant. Boys show less aggression, less impulsivity, and more self-direction.

“As young adults, children of involved fathers are more likely to achieve higher levels of education, find success in their careers, have higher levels of self-acceptance and experience psychological well-being. Adults who had involved fathers are more likely to be tolerant and understanding, have supportive social networks made up of close friends, and have long-term successful marriages.”

Remember you are your child’s first teacher. What are they learning from you?