20 Must-Read Books For Your Child - MumsVillage

20 Must-Read Books For Your Child

“Education is the most powerful weapon you can use to change the world.” -Nelson Mandela

The easiest and best way to self-educate is to read books. If you get your child started on this habit early it won’t be too long till you thank yourself. The benefits will begin to manifest pretty quickly. Here is a list books you can get them started with.

1. Charlie and the Chocolate Factory by Roald Dahl

This is a timeless classic by famous children’s author Roald Dahl. It tells the story of young children who win golden tickets to  Willy Wonka’s chocolate factory tour. The owner of the factory has ulterior motives for the tour, though. These are revealed once Willy Wonka sees the true character of his guests.

Another timeless classic more reputable for the movie however. This story takes us through the life of Matilda, a little girl surrounded by unfortunate situations; crude and indifferent parents and a bully for a  principle. She then finds out she has a power that can help her out.

This classic tells the story of two unlikely friends, a pig(Wilbur) and spider(Charlotte) who live on the same farm.The tale takes us through their friendship as one tries to save the other from death.

A talking cat visit two children is the centre of the story. The cat is famous for its look, tall red & white hat and red bow tie.

5. The Lion, the Witch & the Wardrobe: The Chronicles of Narnia by C.S. Luis

Tells the story of 4 children who are a shipped to a countryhouse during the London bombings of WWII. During their sty they discover another world on the inside of a wardrobe.

6. Diary of a Wimpy Kid by Jeff Kinney

This is a relable series of books set as a young boy’s, Greg Heffley, journal on his everyday life.

7. I am Malala: How One Girl Stood Up for Education and Change the World by Malala Yousafzai

Most if not all heard the story of brave Malala, hers is one that rocked the world. At 11 she stood up for the girl child’s education that resulted in her being shot in the head by the Taliban. She survived but was far from silenced.

A hilarious telling of Stanley Yelnats’ experience in  juvenile  imprisonment after mistaken conviction. Beneath the comedy lies symbols of series issues such as racism.

9. Anne Frank: The Diary of a Young Girl by Anne Frank

Another great story about the bravery and valiance of a young girl surrounded by adversity. Anne Frank documented her time in hiding while  in the Netherlands with her family during Nazi occupation.

This is the story of a young boy with a rare medical facial deformity who attends middle school for the first time after the familiarity of home school.

11. The Giver by Lois Lowry

This book is set in a society that appears to be utopian but revelas itself to be otherwise after the investigations of a an 11 year old boy.

12. The Help by Kathryn Stockett

Tale of African American women working in white household in Jackson, Mississippi in the early 1960s. It tells of their numerous battles with racism.

This master peice follows the life of 15 year old Kambili as her life transitions from a privileged life surrounded by her strict Catholic parents to life in another town with warm family during a period of political turmoil in Nigeria.

14. I Love Ugali and Sukuma Wiki by Kwame Nyong’o

This is a hometown classic that tells the story of Akiki, a young boy, who has to learn the values of sacrifice in return for rewards.

Many repute that is the is by far the best Swahili book. Ken Walibora takes us through the life of Msanifu Kombo. He was born in Tanga, TZ but not without hardships. He eventually leaves to come to Kenya in search of his father who turns out to be a famous poet.

This is another great Swahili read but has English translations available. The book is set in a town near Lake Tanganyika called Kabende ruled by King Mtemi.He feels that his rule has come to an end due to his old age and now has to choose a successor among his sons. 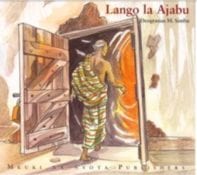 This book has layers to it in terms of meaning and it would be great to have your child read it again once they’re much older so they can understand the deeper meaning. It’s set in a land ruled by a cruel King and Queen who imprison all the blue birds until a little girl sets one free and rides off to save the day.The perfect modern day fairy tale.  The story is inspired by the Jasmine Revolution in Tunisia.

Seeing life through the eyes of a child can be very impactful. You realize that they pretty much see a different world which Uwem Akpan brings us into with this great compilation of short stories each set in a disaster time in an African country. Have the Kleenex ready, there will be tears.

This award winning classes tells the story of a crippled boy, Sosu in a town with dire need. He however makes the best contribution he possibly can.

20. How the Leopard Got His Claws by Chinua Achebe

Chinua Achebe is known more for his symbolic adult books but with this one he aims for children. With a simple folk tale about how the leopard got his claws he discusses the potential danger of power taken by force. In the beginning all animals lived together as friends but things change.

There is really a much bigger pool of great books for your children of all ages. Be sure to read the book before handing it over to your child to ensure you’re okay with all the themes that the book presents. If there is a movie for the book its’ always great to watch it after reading it to see how the story comes alive in a visual form.

You may also like: Why we must all Read Aloud to Older Children