Father's Day Special : A Letter to my Son's Father - MumsVillage 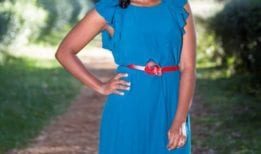 Other Articles from Wangui Thuo

A Letter to My Son’s Father

Home » Lifestyle » A Letter to My Son’s Father

Judging by my son’s facial expressions, I have come to believe that it must be quite something to rest one’s head on a father’s chest.

There is such a sense of abandon, of complete surrender; it is the leaning in, the confidence in the assured security. I hear it paraphrased often that you do not miss what you do not know. Not having my father around when growing up was never a momentous event. It never registered in my conscience that something was amiss. I do not think it was a case of hiding my head in the sand; there just was never this emptiness about the situation. Then I gave birth. The shift in my psyche has been palpable. All this from watching the boys, father and son, do their thing. Often, I have caught myself thinking, oh, that would have been nice to experience with my father.

‘Chwi-chwi.’ That alarm sound signals to my son that his father is home. Interestingly, at just a few months shy of three, he will never confuse his father’s car alarm with that of any of the neighbours’ cars, even when it is an identical sound.

‘Chwi-chwi’ usually sets off a series of events. Ndiyo huyo baba” he will quickly point out as he expectantly watches the door. That his father has had a long day, could be stressed, would wish to nap- all these are irrelevant. The minute the door is open, ‘nibebe! Nibebe!’ and the shadowing ensues.

My son will follow his father everywhere, climbing over and under him, being naughty then being nice, all the while pleasure and admiration in his eyes. He knows he wants ‘muscles kama baba’ and that any must-have purchase –read toy car- is brought by baba from the supermarket. He knows that when he is disobedient, ‘baba is not happy’ and will say sorry and then ask, ‘is baba happy?’ My son knows that his father is his hero, the guy they can get rambunctious with without the constant ‘watch out!’ ringing in his ears.

My husband is the guy who will carry him high on his shoulders and take him for a walk around the neighbourhood, spotting and naming everything they come across. He is the guy who will let him listen to the ‘wheels-on-the- bus’ rhyme on replay for over an hour until the little boy’s neck begins to hurt. He is confident in his father’s love, attention and adoration. And when he falls asleep on his father’s chest, snoring softly, it is an unshakeable trust that baba is synonymous with safety.

So yes, I do wonder how it must feel having that fatherly connection.

Therefore, I silently admire this strong bond developing between my son and his father, one that is certain to carry on for both their lifetimes. To Baba, husband and father, I am deeply humbled by and proud of you. I see your daily hustle to make a great life for our son. You have taken up this task like a real soldier gearing up for duty, tumbles and all. It is beautiful to watch and I am only happy to envisage what fatherhood means by watching the two of you.

Happy father’s day Baba. Here is to many more.

Parenting: 6 Love Lessons From My Children

My Experience Co-parenting with an Absentee Baby Daddy