Isis Nyongo speaks about Motherhood at the GES Summit 2015

Other Articles from Isis Nyongo

This Mum’s Experience at the Global Entrepreneurship Summit 2015

I had the great honour of being invited by the White House to speak at the just concluded Global Entrepreneurship Summit (GES) in Nairobi. This was the first GES that President Obama attended in person. I actually didn’t realise how significant this invitation was until much closer to the time of the event.

Not only did the summit bring together 1,000 outstanding entrepreneurs and investors from around the world for dynamic sessions and opportunities, but also only a handful of other Kenyan women were in the speaker’s line up. These included Julie Gichuru, Hilda Moraa and Susan Mboya.

Personal highlights include being in the same room as President Obama when he addressed the delegation, attending a private dinner with Steve Case and meeting accomplished entrepreneurs from all over the world.

The entire experience was nothing short of amazing.

I spoke on the Women’s Entrepreneurship panel, hosted by Jean Case, CEO of the Case Foundation. As a brand new mother of a newborn, it was a special experience blending my role as a Mum with that of Speaker and Tech Entrepreneur. I felt at home with both, and the energy overall was electrifying. I found it highly motivating to stay the course of the entrepreneurial path.

By now everyone has caught wind that President Obama is passionate about the role of entrepreneurs in boosting Africa’s economies. The central focus of his trip to Kenya was the Global Entrepreneurship Summit where he announced several financial commitments. This fifth annual GES was his first in Sub-Saharan Africa, highlighting the entrepreneurial dynamism of the continent. 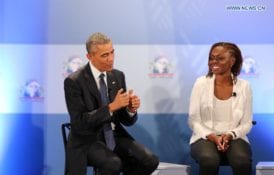 We’ve dug into the details of these commitments to ensure MumsVillage mumpreneurs are aware and take advantage of them:

These were just a few highlights I am excited to share with fellow Mumprepreneurs. To those considering taking the entrepreneurial leap in Kenya, don’t wait! The time is now. You have everything you need, not to mention a powerful support system here at MumsVillage. Indeed we are committed to connecting Mothers in Kenya to their most valuable resource – each other.