If it scares you, it might be a good thing to try. Seth Godin

So there’s something fantastic happening in Nairobi this weekend that I am so excited about that I can’t wait to attend.

Have you heard of Felicia Leatherwood? I hadn’t really until a few weeks ago when I saw her name doing the rounds on some Natural hair groups on Facebook. Turns out she is a celebrated natural hair stylist from LA, California,

She is known to many as “The Hair Whisperer” and is a miracle worker when it comes to hair.

She has styled the hair of personalities such as Viola Davis, Jill Scott, Nicole Ari Parker, Teyonah Paris, Ava DuVernay as well as men such as Will Smith, Terrence Howard and Hill Harper to name a few, for red carpet and magazine cover looks. Her work has appeared in Essence, InStyle, People Magazines, as well as television and film. 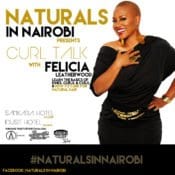 Now before I get into the event details, which I’ll be emceeing as well as participating in as a panel member, I ‘d like to give you a little back story to my natural hair journey and why I’m excited about this weekend.

Funny enough, it’s not as serious or deliberate as many would think. It feels as though everything that has happened with my hair over they years has just been in the realm of “Oh, okay cool.”

I did my first “Big Chop” when I was 9 years old. It wasn’t because I had relaxed hair that I wanted to get rid of but more because I saw a caucasian character on a TV show with a nice tapered pixie cut, and thought all I had to do was tell Jasper the barber that I wanted a “box” and all would be good.

Suffice it to say I cried myself to sleep that night because I could not believe what had just happened. All my hair was gone.

Before the cut I had long, natural hair that cascaded down my back and now I looked like a boy. Even my mum was shocked, albeit a little amused. 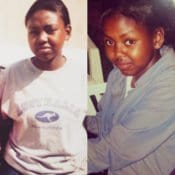 But, I quickly got over it, as kids usually do and soon enough, as my hair began to grow out, the hair relaxer ads started to flood our screens. Cue “Style and Bounce”, ( I loved that song), “Satin Sheen” and “Dark and Lovely”. I begged my mum to let me relax my hair since everyone around me was doing it, and I really wanted my hair to look straight and silky when I went swimming, you know, like the white folk. Of course, there was also the notion that caucasian like hair and skin was better so I did everything I could to try be like that, including sitting in the sun with soap on my face, and putting all my mum’s hair products in my hair. Sorry mum! (I once almost put Veet on my scalp.)

Eventually, 6 months after the big chop, my mum relented and got my aunt to relax my hair at her house.

In my mind, my hair was going to be as long and straight as Mariah Carey’s in about 2 years and I was so ready for it! (I wanted to be Mariah so bad, in every way, singing and looks included.)
My hair care regimen was simple. Swim (which I did pretty much every minute of every day), dry my hair under the ladies room hand dryer, slather on Vaseline and go. I would retouch my hair at home when needed using “Beautiful Beginnings”. In fact, the girl on the box was my hair idol. In a huge way. I wonder what her name is and where she is now. 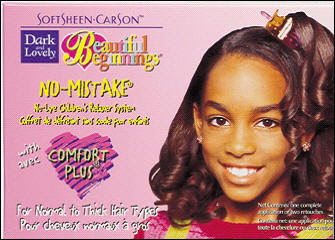 Obviously, my hair didn’t really grow as I expected it to and it just remained in this weird length all through out high school. Also, yo, have I come a long way or what? 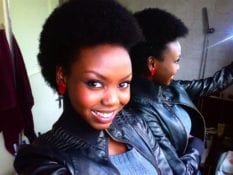 Read more from Patricia Kihoro on her Blog.