But what about Dad?- Letting Your Dads Raise The Kids - MumsVillage 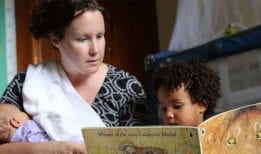 But what about Dad?

Home » Lifestyle » But what about Dad?

When I was pregnant with my first child, a friend told me, “Remember, dads, do it differently. And that’s okay.” I didn’t think much of it at the time – I assumed she meant that he might put the diaper on funny or dress the baby in mismatching clothes. What I didn’t realize was that my friend was warning me against a phenomenon known as “maternal gatekeeping.”

I have seen so many women inadvertently discourage their husbands from doing their share by being too controlling or critical. Social scientists call this “maternal gatekeeping,” which is a fancy term for “Ohmigod, that’s not the way you do it! Just move aside and let me!” – Sheryl Sandberg, Lean In: Women, Work and the Will to Lead

While we may not be aware of it, so many of us moms are guilty of gatekeeping: interfering with dads child-rearing and household efforts. This may sound surprising – why would anyone want to stop their spouse from helping with all the work that comes with having kids? Why would we try to do it all ourselves?

Many of us have a “mother knows best” attitude, and when they see dads doing it differently, they stop him and take over. I was definitely guilty of this, especially in the first few months after our baby was born. I was neurotic about everything, and I wasn’t doing my exhausted, overwhelmed self any favours.

The more I got in the way of my husband’s parenting efforts, the less inspired he was to try to help. I was really struggling with the reality of having a newborn, and yet I was alienating my biggest ally! So I tried to loosen up, and let go.

In doing so, I found that the more I encouraged my husband’s efforts as a parent, the more involved he wanted to be! And we both discovered what an amazing father he is. In fact, there were some things that he was able to do far better than I could, like giving the baby her bath, or calming her down when she was fussy. His intuitive nature with both of our children astounds me every day.

What is the division of responsibilities like in your home? Do you let Daddy do it his way?

Lamaze Theory Class
We use cookies to ensure that we give you the best experience on our website. If you continue to use this site we will assume that you are happy with it.Ok

Lamaze Theory Class
We use cookies to ensure that we give you the best experience on our website. If you continue to use this site we will assume that you are happy with it.Ok