Blind date Chronicles : When a Guy says "I'll be in Touch" - MumsVillage 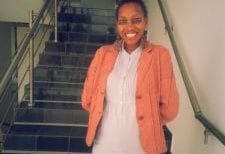 Other Articles from Karol Muthoni Njoki

Blind date Chronicles : When a Guy says “I’ll be in Touch”

Home » Bloggers » Blind date Chronicles : When a Guy says “I’ll be in Touch”

We had been chatting on Twitter and WhatsApp for a while now and we’d finally agreed to meet up now that he was back in town.

I dressed up in a knee-length African print dress, boots and of course my lucky watch. He texted me to let me know that he will be at the bar, dressed in a leather jacket. I bid my friend goodbye and told her I’d be back in the house in an hours time since it was my turn to make dinner. I was a bit nervous as I headed to the meetup but a part of me felt very adulty (yes I am allowed to make up words). I mean isn’t this what part of growing up old is?

Meeting people after work for drinks, making friends, hanging out with people who aren’t in your circle of friends. The logic part of me was scared, “What if he was a psycho?”, “What if he wasn’t as interesting in person? Or “What if he was shorter than me?” (I know it sounds vain but I am 5’9, so anyone shorter than me is an outright put off). All these thoughts ran through my mind as I did the 20-minute walk to the pub.

But this was the year that I tried out new things so I was going to keep my word and show up for the date.

I knew it was him the moment I set my foot in the pub, notwithstanding the fact that I already knew what he was wearing. Apart of me felt drawn to him while I stood at the entrance waiting for my eyes to adjust to the lighting. He was hunched over, I guess he was on his phone.

Funny how nowadays everyone is always glued to their phone screens whether or not they have something that they are doing. Whatever nerves I had earlier on had disappeared and they were replaced by curiosity and the need to know more about him. “I know I should have a cool opening line. Everyone in movies usually has one.” He put his phone away (told ya he was on his phone), turned and smiled at me, “Well that is already an opening line.” He stood up and hugged me warmly, boy was I glad that he was taller than me.

He had well-manicured nails ( I noticed this as he pulled out a seat for me), definitely someone who looks after himself plus his shirt and jacket fit him really well. “I am glad you could make it.” “Me too.” He then called over the waitress and I placed an order. “So tell me about yourself.” He then proceeded to tell me all about himself.

Tales of him growing up in the desert and lighting fires to scare away wild animals, of how he once had to jump over the school fence to avoid getting punished for coming late to school to him joining the army to fight for our country. I shared with him my dreams of being the second woman in Africa to win the Nobel Prize, my current situation of being at crossroads in my career.

We finally decided we had had enough to drink when we began singing along to the songs the DJ was playing. Funny how when you’re drunk you know all the words to the songs that are playing. You also tend to think that you are the best singer in the universe, Adele and Beyoncé have nothing on you. We parted ways and decided to meet up again, over a month ago.

I’m still waiting for him to get in touch with me, I will not be the one who texts first every time, I have my own life to lead. Pride and dating in the digital age.

How to Get the Relationship of Your Dreams

Are you tired of dating and not finding the right partner, or rather not dating at all?

It might seem like it is a jungle out there. Add technology, a changing and evolving society and people get completely overwhelmed! I have created this course to help you figure out how to get the relationship of your dreams. Some of these things you may think you know, but if there is one thing I have learned in my years as a relationship coach, it seems obvious, until it isn’t!

I hope you really enjoy this course and that it adds value to your life.

What You Will Learn

2. My needs in a relationship