True Love : Washing Pee off the wall on a Friday night TOGETHER! Unknown

Two weeks ago, I met with Alice Kibagendi who I had first featured on this blog in 2012 here. Alice is a very hospitable lady who made me really feel at home in her house -what with all the sumptuous meal she offered me. Anyway, here are the details of my conversation with her.

In August 2011, — Alice and Anthony Kibagendi who had gotten married the year before welcomed their first child, a daughter whom they named Amara.

Alice, 30, a human resource professional recalls of her daughter:

“Amara was a very beautiful, sweet and bubbly baby who brightened up our lives. Every day, my husband and I would look forward to our return home to spend time with our little princess,” she remembers.

But one evening in March 2012, the unexpected happened.

Six-month-old Amara died when she choked on food while being fed by her nanny. Her parents were crushed.

“It was sudden, something we had never imagined would happen. It was unbelievable that she was with us one minute, and the next she was gone, without warning. Losing a child is the worst form of tragedy that any parent can go through. It is a kind of pain that pierces right through your heart,” Alice says.

The days after Amara’s passing -as the family made burial plans, were particularly excruciating.

“I was in shock. I asked God so many questions but never seemed to get answers. I cried until I could cry no more,” she says.

But as friends and relatives streamed into the Kibagendi home to comfort them, Alice picked up something in the words of comfort they received from the countless visitors.

“In their attempts to comfort me, many would tell me that they knew of other babies who had choked, that I should take heart because ‘these things happen to many babies’. Almost everyone who visited me had a story to tell of a baby who had choked. Some mothers had actually been the ones feeding their own babies when they choked to death. Even in my own sorrow, my heart wept for them. I could only imagine their pain and the self-blame they heaped on themselves,” she says.

Prior to baby Amara’s passing, Alice had only ever heard of one other choking incident in a baby. And even then, she had asked herself thousands of questions on a cause of death that she viewed as preventable.

“I wondered what the house girl had been doing at the time the child was choking. Was she engaged in other chores? Was she watching television perhaps? Was she on the phone maybe? What exactly had she been doing,” Alice asked herself.

But there she was now, mourning her own daughter — a death in similar circumstances. Her nanny had not been doing other things. She had been feeding Amara. It had been an accident.

When baby Amara choked, Alice had been at work. The more she replayed her daughter’s last moments, the more she questioned herself, wondering if she herself would have been capable of saving Amara had she been present.

“I asked myself if I knew the correct way to handle a choking baby. But the more I researched, the more I discovered that I did not really know how to properly assist a choking person — a clearly life-threatening medical emergency.”

Her desire to fill this knowledge gap is what led Alice to enroll for a basic First Aid course.

“I did not want to be unprepared in case such a situation ever arose. Choking could happen to anyone — whether a child or an adult — and I wanted to be equipped with the right knowledge and skills on how to handle such an emergency,” she says. 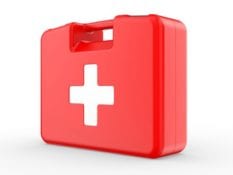 Alice mobilised many members of her family and friends to attend the basic First Aid training as well. Even after the training, Alice continued to research more on First Aid. She would spend her days watching videos on the internet and reading hundreds of articles on the same. She would then share all she had learnt with her friends mostly through her Facebook account.

“I would receive numerous responses, with most people asking me where they could be trained on basic First Aid. Many of them were parents with little babies. I understood where they were coming from.”

Alice then realised that her friends represented thousands of other people out there — people who needed to be equipped with basic First Aid skills. She decided to do something about it.

In June 2012, just three months after baby Amara’s death, she set up the Amara Initiative.

“The goal of Amara Initiative is to ensure that as many people in society have the skills necessary to intervene in a life-threatening situation before professional medical assistance arrives. This, after realising that both children and adults die in situations where basic First Aid could have saved their lives.”