People who say they sleep like a baby haven't got one. Unkown

Daddy Tales: A Journey Into Fatherhood

Okay. So it is Mummy Tales birthday today. I have taken over the blog for at least 24 hours and plan to inject some fatherhood into this very mummy skewed perspective of Kitty’s story (Ok, maybe that is one reason it works so well).

Anyway, I was once told that the one who tells the story owns history. So for one day this year, I want to own a little bit of Kitty’s story. Unfortunately, I am not a wordsmith. But I can take a photo or two. So I will try and tell my tale using photography. As they say, a picture is worth a thousand words. If that is the case, this is the equivalent of like 5 blog posts. Hope you enjoy.

A year ago, I learned that I was going to be a dad. That was great news as I was with the woman I loved. The only thing I didn’t know was that during pregnancy, she was going to be more of a scatter brain as the days wore on. The shoes displayed below are testament to that. Check out My Increasing Memory Deficiencies to better understand what I am talking about.

Once the day arrived for Kitty to be brought to the world, he announced his impending arrival in fashion at 4:47 am on a Sunday.

We rushed to hospital in record time. Being “dotcommers”, we were experienced in being parents and doctors even though we didn’t know anything. During Lamaze sessions, I had been told about meconium. I proceeded to announce that the water which broke indeed contained it. So we weren’t just going to give birth to Kitty but rather do it as an emergency. Turned out it was a false alarm. I guess my brain is mush at 4 am. Kitty came at 2:47 pm and my stressful pacing ended when I first laid eyes on him. 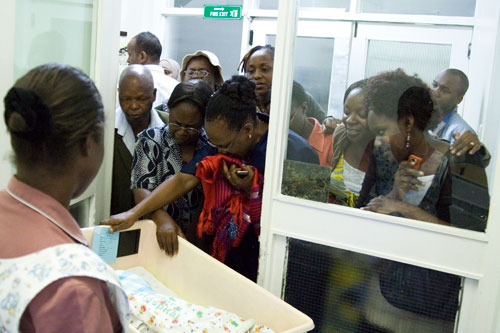 Guess I wasn’t the only concerned person when it came to first laying eyes on Kitty as most of our family did arrive at the hospital two hours later to pray and usher him to the world.

This is the sight that greeted the visitors. Kitty’s first ever photograph. Welcome to the world son. 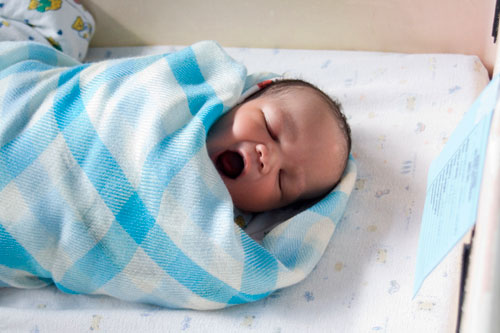 Holding him in my arms during those first days was amazing, scary, great, etc. You get the point. It was the first time I ever held my own child, let alone a baby who was a few hours old.

By the way, a friend of mine gave birth at the same hospital and she remarked that all kids born there look the same due to the blankets and clothes they are all dressed up in.

How do you wash a new born baby? This is the “Washing Baby for Dummies” manual. It comes with diagrams which is very handy. 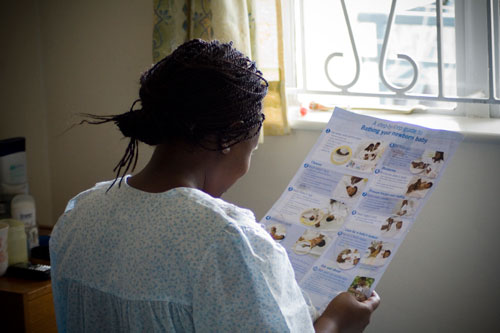 I was told by Mama Kitty that you sleep when he sleeps. This was really nice when he was this young. This past Sunday, I slept when he slept… At 1:30 am! He is not as compliant as he used to be. Where is the Piriton?

Do you see some teeth? No? Well, I thought they were coming out at age 3 months and had a personal party in the office. At 7 months, I still see teeth and they aren’t out yet. Hmm… Is it my sixth sense?

When young, Kitty loved eating his mother’s face. Wait, he still does. He has even learned to go for “nyonyo” despite clothes being in his way. How now? He also has a mature man’s expression. This was taken in shags (bottom left). He also enjoys his auntie’s company in Western Kenya (right).

The two great joys of my life. Kitty and his mother. Notice the earring? I am sure he wants to put it in his mouth.

I love you Kitty. 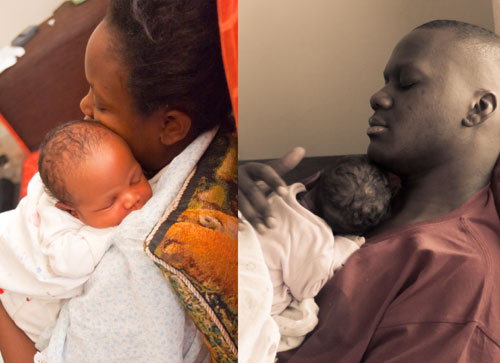 As you grow up, I am looking forward to knowing of your dreams and fears, your joys and triumphs and failures. I will guide you where I can, teach you whenever possible and learn from you each day. But most of all, thanks for enriching our lives and giving your parents such joy. We love you Kitty.